This time last week I was still out in the desert somewhere between New Mexico and Arizona and I still can’t believe I was there. Eventually, I will get around to writing a more informative guide on going out the White Sands National Monument and camping out there, but for now, I’ll just give everyone a gooey photo orgasm of the time Grant, Lex, and I spent out there. Hands down White Sands is the most beautiful and unique piece of the United States I have visited.

We arrived in the late afternoon down at White Sands and were exhausted from the 3-whiskey-double-shot-each plane ride and the world’s longest hungover road trip across the most boring swaths of desert I’ve seen in my life. We made it, took a quick look around, and decided to head into town to eat and pass out.

The first night we decided to go get a cheap room back at Alamogordo for the evening so that we could return in the morning to get our camp spot reserved.

We returned bright and early at the crack of 8:30 am to ensure we got a camp spot as there were only 10. We were the first in the door when they opened at 9 and we were in.

Don’t let the fact that it’s sand and in the desert deceive you. The snowy white sand actually starts cool- Gypsum sand actually retains water, helping it not get burning hot.

We hauled in all our gear around high noon, you can’t set up camp until 1 pm. It’s can be between 0.5 and 1.1 miles into camp. We got in, set up our tent, buried our water bottles and food down in the sand, and set out to explore for the day. If you’re wondering why we buried food and water in the sand- it’s because the sand stays cold.

I’d never seen a place that changes so much with the changing light of the day.

The real magic begins as the sun begins to set, the above photo is just the start.

First, the sands seems to turn periwinkle and then the pinks start to roll over.

Then the pinks move up onto the mountains to the east and the sand begins to glow a pale lavender.

Then the lavender lifts off the sands as the sky turns into a rainbow of pastels while the sands gain back some whiteness.

We all still can’t believe we got to watch all this, but the best is still ahead of us.

We eventually headed back to camp after the sun went completely below the horizon and the color show ended.

Back at the tent, we ate our super fancy dinner: a greasy rotisserie chicken and some watered down Pedialyte… because we’re classy. As we sat and ate our hungover-meal of choice the stars began to come out one by one. (This tent photo was actually taken at about 4 am).

We stayed up until about 10 pm watching the not-quite-as-exciting side of the milky way overhead and decided to take a nap until midnight and head back out again. And by this point in the night the temperature had dropped to near freezing.

Midnight came and the milky way was gone completely out of the sky. I forget how quickly the night sky rotates outside of Alaska.

By the next alarm is was 3 am. We hiked up the sand dune next to our tent. The trip was worth it! I’d never seen the milky way like this before. The lights you see in the above photo’s left-hand side are coming from the city of Alamogordo, the yellow light you see towards the right is the more distant light pollution coming from Las Cruces.

By about 5 am I finally called it a night and headed back to the tent. Grant and Lex called it long before I did.

Finally, I fell asleep even though the bitter cold out in the desert. But hey, one night of misery in that cold was totally worth it. I know, we’re all from Alaska… This is a different kind of cold.

Before I knew it the sun was back up in the sky and the air was finally beginning to warm again.

I wanted to show you guys the park as I get ready to write on how to visit the park.

Where is the most amazing place you’ve seen the night sky? 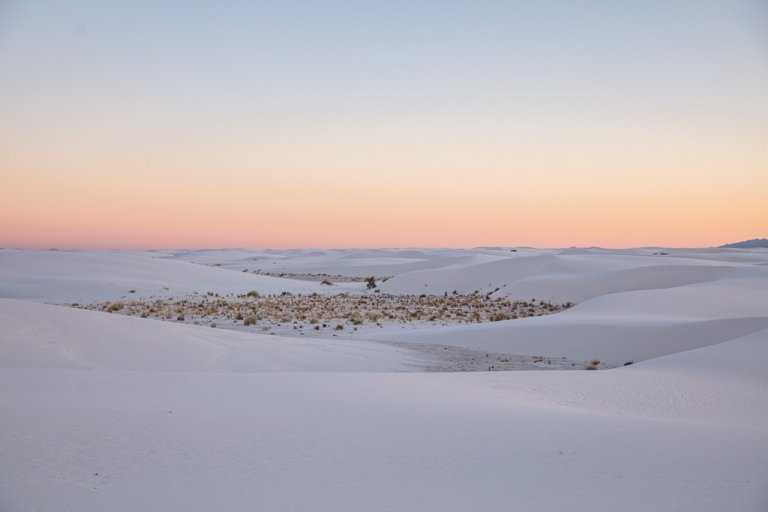 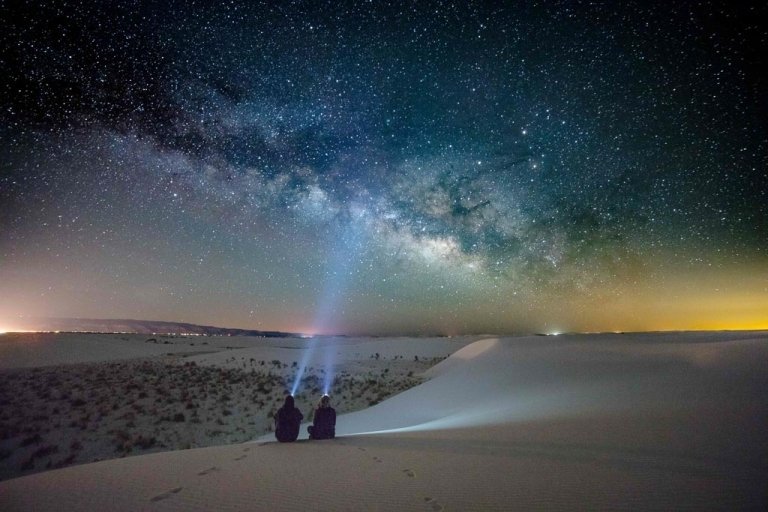 3 thoughts on “A Photographic Journey Through White Sands”