How to get to Yanar Dag, Azerbaijan’s Fire Mountain was originally published in November 2022

Azerbaijan is known as the land of fire, making Yanar Dag, Azerbaijan’s famous burning mountain, a sight to behold. Located a short trip from Baku, Yanar Dag is a great quick escape from the city.

Naturally, Yanar Dag landed on my radar for my visit to Baku being someone who is fascinated by strange things. I’m no stranger to forever-burning fires either after having the chance to have visited the Darvaza Gas Crater (more commonly known as the Door to Hell) in Turkmenistan.  I will say that Yanar Dag isn’t wildly impressive given that it is just a small fire burning from a hill but it’s still an interesting phenomenon that I think warrants a quick visit, especially if taking the cheap route and utilizing public transport to get there.

So What is Yanar Dag?

Yanar Dag translates out to burning mountain in Azeri- which is exactly what it is. Several legends surround how the fire started ranging from a shepherd who carelessly tossed a lit cigarette onto the hillside, but alas, there are records that show that Yanar Dag has been continuously burning since at least the 13th century when the likes of Marco Polo passed through.

This whole area around the Absheron Peninsula is rich in natural gas, and therefore the hillside of Yanar Dag is loaded with it. It’s even said that if you light a match to some of the rivers nearby you’ll get he water to set ablaze.

How to get to Yanar Dag from Baku

The red/green line will bring you to Koroglu Station pretty quickly and efficiently. A ticket on the Baku Metro will set you back 0.30 AZN. You must buy a BakiKart for 2 AZN and load credits onto it in order to ride the Baku Metro, which can easily be done from the BakiKart machines at the entrance of each metro station.

Once you arrive at Koroglu Station and then exit the platform you’ll need to start looking for the bus stop. Note that there is an official stop for bus #217 that is well marked over at the bus platforms located to the northwest of the entrance to Koroglu Station.

Locate bus #217 and get on it. It will cost you 0.50 AZN per seat for the roughly 40 minute ride to Yanar Dag. You’ll stay on the bus until the final stop.

Note that you need to have a BakiKart to pay for the bus (the same card mentioned previously for taking the Baku Metro).

The stop for bus #217 is actually located at the Koroglu Neqliyyat Mubadile Merkezi Bus Station just to the north-northwest of Koroglu Metro Station. This wasn’t where I happened to catch the bus though- I caught it in entirely the wrong spot but got lucky.

I happened to waltz on out of Koroglu Station and spot #217 parked on the little offshoot of Heydar Aliyev Avenue that passes right in front of the metro entrance (you’ll see plenty of buses stopping here and loading/offloading passengers). The driver was napping and saw me when firing up the bus and waved me on. We had a chat in my broken Russian and stopped by a kiosk for a glass of chai before continuing over to the actual bus stop to load up.

We left at about 16:10 and arrived at the final bus stop about 600 meters before Yanar Dag at around 16:50- in perfect timing to catch sunset over the burning mountain.

My bus driver told me to hop on another bus parked at the stop marked #147. Several other passengers from my bus got on there too- it didn’t appear that there was a fee for this bus as I didn’t see anyone scan a card or pay. You’ll need to pay attention and let the driver know to let you off at Yanar Dag as you pass it.

Upon arrival walk over to the kassa and pay your Yanar Dag entry fee. Entry to Yanar Dag is 9 AZN per person. You’ll be given a ticket that you will scan at a turnstile to enter.

What to See and Do at Yanar Dag

Of course, the main attraction is the flames emanating from a hill. After you enter the complex you’ll walk down the steps of an amphitheater to reach them. At the top of the amphitheater is a small cafe, some stalls selling touristy things, and a small museum.

The complex also feature a playground and a toilet block out in the parking lot.

Once you’ve had a chance to check out the burning hill, go back up the steps of the amphitheater and walk across the bridge that will bring you atop the hill where you’ll have views of the village below and clear out over to the Caspian Sea.

Getting Back to Baku from Yanar Dag

Going back to Baku is pretty simple. Either hail down bus #147 from the main road outside Yanar Dag or hoof it back 600 meters to the bus stop.

From the bus stop wait for the next bus #217. Get back on, pay your 0.50 AZN for a seat and ride back to Koroglu Station.

Once back at Koroglu Station, head back underground and take the Baku Metro back to your accommodation or on your on your next destination.

Take a Bolt out to Yanar Dag

Don’t wanna deal with public transport? No worries! You can easily take a Bolt to Yanar Dag and back.

Expect to pay about 8-12 AZN one way for a Bolt to bring you here. It would be smart to book a return trip to Baku from the app so you don’t have to find a ride back.

Have any questions about visiting Yanar Dag?

Ask your Yanar Dag questions in the comments section below. 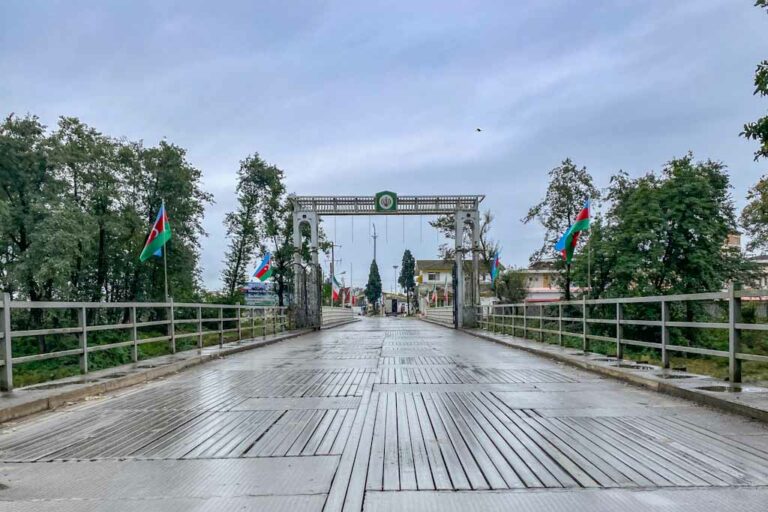 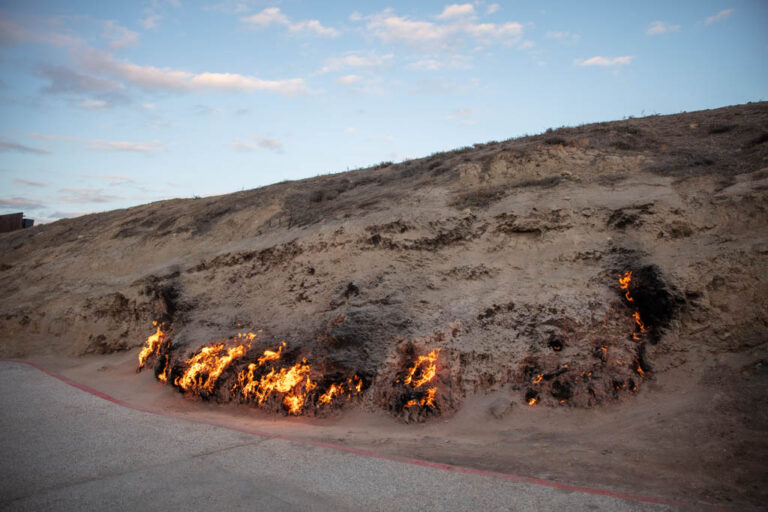