Visiting the Muyil Ruins and the Muyil Canals ended up being one of the only things in Tulum I actually enjoyed. I didn’t find Muyil to be overcrowded, especially visiting in the afternoon until close when I did. So if you’re looking to escape the Tulum crowds (they’re nearly unavoidable), this gem within the Sian Kaan Biosphere is the perfect place to go.

The Mayan Ruins at Muyil

Muyil, which you will also hear referred to as Chunyaxché is among the oldest Mayan ruins found on Mexico’s Yucatán Peninsula. Researchers estimate that Muyil was inhabited from 350 BC until 1500 AD. It was an important center in this period being located along a strategic trading route that connected other Mayan cities extending southward through Central America to the famous city of Coba which is located north of Muyil.

From the entrance to the Muyil Ruins; you’ll first pass the Entrance Group Complex, which has sat largely unexcavated. The only portion of the complex that has been explored is the building known as Structure 6 which has been only partially excavated.

The ruins of Muyil’s main feature is of course the Castillo– a 57 foot tall pyramid that bears quite a resemblance to the Tikal Pyramid in Guatemala. Excavations revealed two structures within the Muyil El Castillo Complex. One is the Temple of the Herons, taking its name from the bas relief pieces embellishing the walls and the other is the Temple of the Falcon.

Continuing along a path that leads into a forest to the north of El Castillo you will arrive at the Pink Palace that is sat amongst other structures. The Pink Palace would have been a Mayan temple. It’s a tiered structure with stairs leading to the top (unfortunately you can’t climb up it) and features two chambers and an altar within.

Finally, there is a small temple-like structure located along the Mayan canals that connect the Muyil and Chunyaxché Lagoons to the sea. It’s just a few steps off of the boardwalk from where people would be dropped off by their boat on the lagoons to float along the Mayan Muyil Canals.

I hadn’t planned to visit the Muyil Lagoons or Canal at all, to be honest. I had come just to visit the Muyil Ruins, but upon arrival, I met two women who had booked a canal tour and were looking for an additional person to join. I thought about it for a minute and figure why not- how often am I in the Riviera Maya anyway? (it had been 20 years since I had last visited to be exact). So, I arranged my boat trip on the fly (more practical info on how to visit the Muyil Canals and Lagoons later).

From the Muyil Ruins, a path meanders through the jungle for a little less than a kilometer with signposted tree species and even a jungle lookout tower, eventually arriving at the boat dock from which the Muyil Canal boat tours start.

The boat dock is situated on Muyil Lagoon, the smaller lagoon of the two I visited on my Muyil Canal trip. As we cruised along Muyil Lagoon, we managed to see different nesting bird species, but sometimes you can get lucky and see manatees, dolphins, and other aquatic species.

We then ducked into an archway of trees where our boat captain explained that these canals were constructed by the Mayans using limestone to connect their ancient city of Muyil to the sea via Laguna Muyil and Laguna Chunyaxché. An impressive feat.

Eventually, the tree-arched canal gave way to the much larger Chunyaxché Lagoon where we kept our eyes peeled for wildlife.

Finally, we entered yet another narrow archway of trees dredged by another white limestone canal. This canal from Chunyaxché Lagoon extends all the way out to the sea.

We continued in the boat a little way up the canal and disembarked onto a boardwalk where a short few steps away brought us to the previously mentioned temple. After checking out the temple, it was time to put on our ‘Mayan diapers‘ (flip the lifevest upside down putting your legs through the armholes) to float along this ancient Mayan lazy river.

It took about 45 minutes to float along the section of the Muyil Canals before we arrived at another dock where we were able to walk back to the original boardwalk and returned by boat back to the dock on Muyil Lagoon.

How to get to Muyil

It’s pretty easy to reach Muyil on your own, but if you aren’t interested in trying to make these arrangements on your vacation in Tulum, you can check out this Muyil Ruins and Canal tour.

Getting to Muyil by Bus

Getting to Muyil is a lot easier than most people think despite it being located a bit off the beaten path in an area like Tulum. To reach Muyil, all I had to do was go to the ADO bus station in Tulum and ask for a ticket to Muyil at the counter, and wait for the next bus to come at 1:30 pm. The bus that goes to Muyil is just a regular ADO bus, so you cannot book tickets online or through the ADO app.

Do note that your ticket will say Chunyaxché on it, but the guy who sold mine to me did write Muyil on the top corner of the receipt. I boarded my bus when it arrived at the station and off we went. The driver had seen my ticket said Muyil on it so he dropped me off right at the entrance to Muyil Archeological Site (ruins) rather than at the actual bus stop a couple hundred meters down the road.

Buses depart Tulum every 30-60 minutes, so you won’t be waiting long to get on. The trip takes about 30 minutes each way.

If you plan to return to Tulum from Muyil by bus all you’ll need to do is return to the bus stop and get on the next one headed back to Tulum. You can pay the driver once aboard (make sure to have small bills).

Getting to Muyil by Colectivo

You can also take a colectivo to Muyil from Tulum. Colectivos depart Tulum from next to the ADO bus station. Just ask around for the colectivo headed toward Filipe Carrillo Puerto and let the driver know you want off at Muyil.

Personally, I took the ADO bus to Muyil and planned to take it back but quickly realized that since I visited in the late afternoon and was trying to leave Muyil around 5:15 pm after the park had closed that I wasn’t going to find a bus. I figured I’d look for a colectivo to return back to Tulum so I went to the bus stop and waited.

After about 10 minutes I flagged down what I thought was a colectivo but it was empty- so I inadvertently hitchhiked back to Tulum 😂  (if you know me then you probably aren’t surprised). I did ask the driver when I got in how much the colectivo cost and he said 40 pesos. When we arrived back in Tulum he gave me the money I had passed to him back (in all honesty I think he was just driving back to Tulum either way and didn’t mind picking randoms on the side of the road.

Getting to Muyil by Taxi

I can’t comment on taking a taxi to Muyil from Tulum but I would brace myself for an insanely high price tag as I quickly found out taxis in Tulum (note that ridesharing services are not allowed here) are among the most expensive in the world (seriously, I read an article that said the cost 2x that of taxis in Manhattan!). If you do opt to take a taxi, make sure that they will wait on you and bring you back to Tulum. And do make sure to negotiate a price before you get in, though I did find that the white and red taxis in Tulum had fixed prices (nonetheless they were insanely expensive).

Getting to Muyil by Rental Car

If you have your own vehicle getting to Muyil from Tulum will be easy. You will take Highway 307 south from Tulum until you reach Muyil, which is signposted. Note that you will lose mobile reception a few kilometers before you reach Muyil so I would recommend having maps.me or google maps offline already downloaded to your phone.

There is a parking lot outside the Muyil Ruins that is free to use.

Tickets and Hours for the Muyil Ruins Archeological Site

The Zona Arqueológica de Muyil has a small office as you walk to the ruins where you’ll need to pay a fee of $65 MXN to visit the Muyil Ruins.

Prices for the boat trip to float the Muyil Canals and Cruise the lagoons are 1,000 MXN per person if you book with one of the guys from Sian Kaan Tours that will approach you when you arrive at Muyil Ruins. They can accept both cash and cards. The tour lasts about 2 hours.

Of course, there is also a 4 hour long tour you can do that includes Muyil but explore deeper into the which will cost $4,000 MXN+ but is per boat, meaning you can split it amongst others.

So for me, my total costs for visiting the Muyil Ruins and Canals independently was:

You will have no problems finding a tour of Muyil if that’s what you wish to do. It was cheaper to arrange it on the fly like I did but I know some of you like to make advance plans for your vacations. If you’re staying in Tulum, you’ll find plenty of kiosks offering the trip to Muyil including transport. If you prefer to book in advance online, check out this highly-rated tour of the Muyil Ruins and Canals that includes pick up and drop off in Tulum.

If you are not staying in Tulum it’s totally possible to visit the Muyil Ruins and Muyil Canals on a day trip from Cancun or Playa del Carmen. Check out this Muyil day tour with stops at the Tulum Ruins, a cenote, and Playa del Carmen from Cancun.

Best Time to Visit the Muyil Ruins and Muyil Canals

I had been told the best time to visit the Muyil Ruins and Canals was when it opens at 8 am before it gets crowded. I didn’t arrive there until 2 pm, staying until 5 pm and besides me and the two girls in my boat, I think I saw 3 other boats with people in them. Based on my experience I would recommend the late afternoon too.

Have any questions about visiting Muyil Ruins and the Muyil Canals? 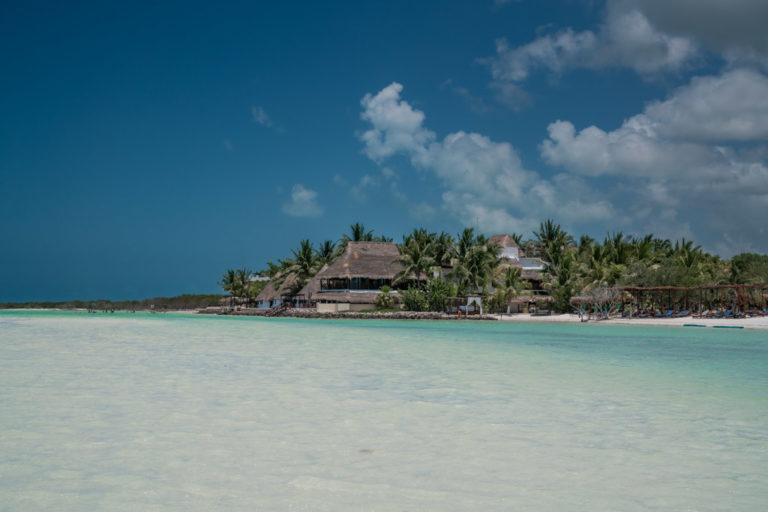 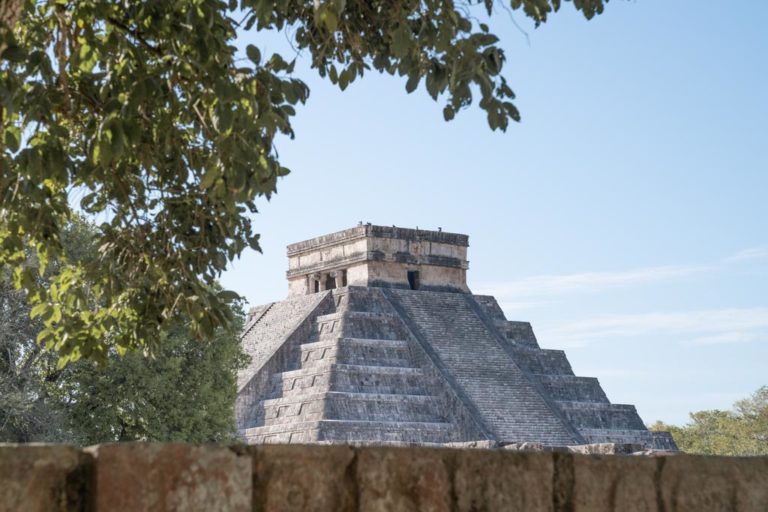 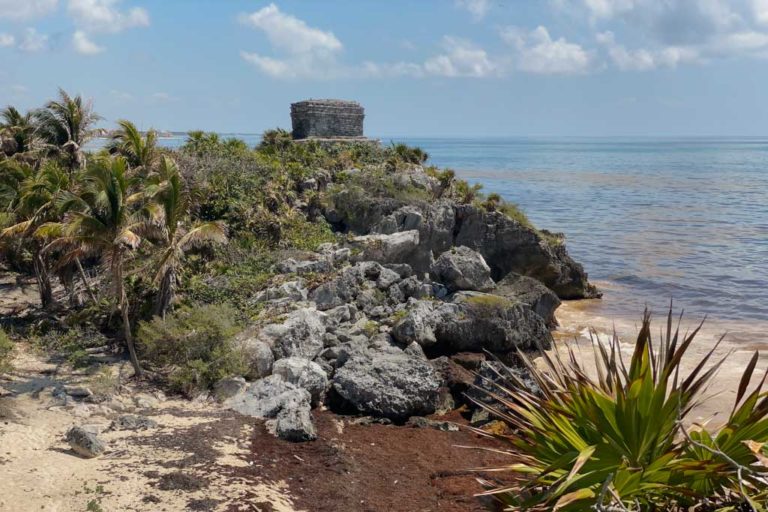 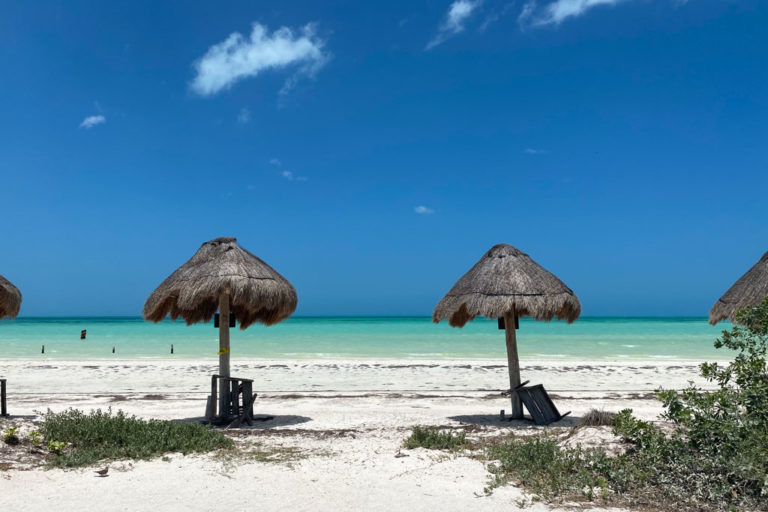 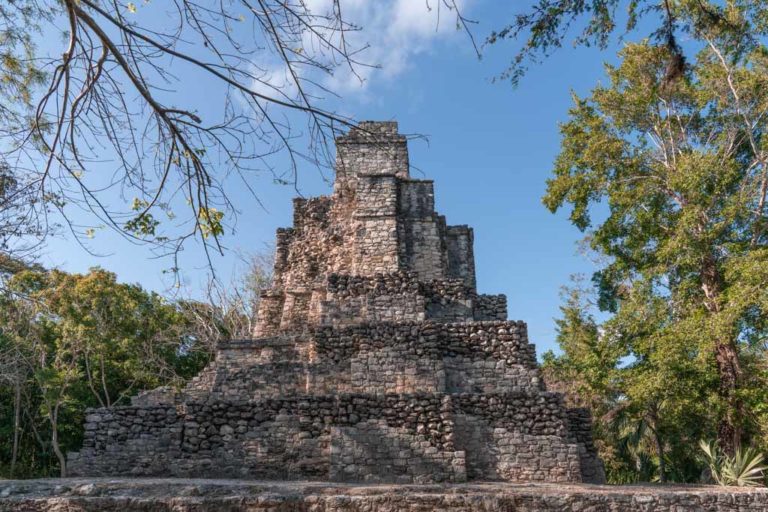