Once an ancient city and center of the Khmer Empire that ruled over most of the Southeast Asia landmass, Angkor Wat now sits in breathtakingly beautiful ruin. To get the most out of your Angkor Wat visit, I recommend getting a three-day pass and booking accommodations in Siem Reap to get a chance to decently explore the area.

Angkor Wat is actually comprised of countless temples and ruins, with the most popular being Angkor Wat, Ta Prohm, Angkor Tom, and Bayon.

Twice have I gone to Siem Reap, of course as the jumping-off point for the Angkor Archaeological Sites. The first time I only got to spend one day there, checking Angkor Wat and Ta Prohm off the list, knowing that I had to come back to see more. The second time I visited Angkor Wat I took my best friend, Tay, to spend four exploring the ruins and temples of the archeological complex.

I have seen a good number of the temples at this point and I don’t feel a need to go back very soon, but I’m sure I’ll be back eventually. There’s just something magical about all the temples.

Use the following guide to plan your perfect visit to Angkor Wat. I also recommend the Bradt guide to Angkor to help organize your trip.

The Main Sites At Angkor Wat

Angkor Wat is the largest and most well-known temple of the entire complex. Built by Suryavarman II between 1112 and 1152 as a tribute to Vishnu.

Historians believe that Angkor Wat was built as a mausoleum and temple to Suryavarman II. Angkor Wat is most impressive at sunrise, so there will be large crowds. I highly recommend a sunset visit to get a less crowded glimpse of the temple and its impressive Bas-reliefs.

Ta Prohm is best visited in the early morning while the crowds are all oohing and awing at the Angkor Wat sunrise before they make their way over in the mid-day. Ta Prohm is one of my favorite temples in the world because of how it was left it (somewhat) as they found it: still covered in jungle.

Though some jungle has been cleared from the ruin, the largest trees growing straight out of the temple remain. Ta Prohm was built in 1186 as a Buddhist temple dedicated to Jayavarman VII’s mother.

Angkor Thom means ‘great city’, built under Jayavarman VII’s rule between 1181 and 1219. Angkor Thom has five gates and is comprised of Bayon, Baphuon, the Terrace of Elephants, Phimeanakas, the Terrace of the Leper King, Preah Palilay, and Prasat Suot Prat.

I recommend entering the complex from the eastern gates as they’re less crowded than the gate along the main road.

With 54 towers and 216 faces of Avalokiteshvara, Bayon sits in the middle of the ancient city of Angkor Thom. For the best light, visit in the morning after sunrise.

Built as a temple of  Udayadityavarman II and dedicated to the Hindu God Shiva, Baphuon actually predates Angkor Thom. By the late 15th century Baphuon would be converted into a Buddhist temple housing a 9 meter tall and 70 meter long reclining Buddha. Eventually, the entire temple collapsed, and in 2011, after 51 years of restorations, the temple was reconstructed and opened to the public.

The Terrace of Elephants was where the city’s public ceremonies were held. Try to visit in the early morning or close to sunset to avoid the crowds.

A Khleang-style Hindu temple whose name means ‘celestial palace’. It’s worth visiting to climb atop for great views of Baphuon.

Terrace of the Leper King

Legend points to two of the Angkor kings having suffered from leprosy. It is believed that the statues inside are of Yama, the god of death and that the terrace served as a crematorium.

Preah Palilay is a small Buddhist sanctuary with a unique chimney-like structure. Preah Palilay is often skipped over by most who visit Angkor Wat sites, so this is a good chance to escape the crowds.

Meaning the ‘temple of tightrope dancers’, Prasat Suor Prat consists of 12 red towers of laterite. Its believed that here artists performed on rope bridges strung between the towers for the king, hence the name.

Where to next? Why not add beautiful Koh Rong to your Cambodia itinerary

Other Temples Of The Angkor Complex

This humongous Buddhist monastery’s name means ‘citadel of chambers’ owing to the maze of monk’s chambers within.

This is one of the smaller temples of the Angkor complex, named after the Samre people who once inhabited the area. The temple is associated with the legend of the Cucumber King and has been nicely restored.

Eastern Mebon once sat on an island in the middle of Eastern Baray, a manmade lake that has since dried up. East Mebon is comprised of five towers worth climbing up to view the impressive stonework.

This five-tier, seven-level temple-mountain is best viewed at sunset, though many tourists do the same, so if you’re looking to avoid the crowds an early morning visit may be best. Phnom Bakheng was the center Yasodharapura under Yasovarman I from 889-910.

While Prasat Kravan doesn’t look like much from the outside- its real allure is on the inside of the five brick towers. Intricate carvings lie inside the towers of the 921 temple.

Built in honor of Jayavarman VII’s father. Preah Khan served as a center of Buddhist worship and as a Buddhist university.

Preah Neak Poan was built to celebrate Buddha and originally served as a hospital under Jayavarman VII with animal figures spraying holy water from their heads to cure the ailments of visiting pilgrims.

It is believed that Pre Rup may have served as a royal crematorium because of its name meaning ‘turning the body’. Five lotus flowers sit atop the highest tier of the temple.

Nearby to Banteay Kdei is Sra Srang which serves as a pool of ablutions. It was initially used by only the king and his wives.

Though never finished, Ta Keo’s construction went on between 968 and 1001 under Jayavarman V and dedicated to Shiva. It’s a punishing climb to the top in mid-day heat (I know, I did that), so I’d recommend visiting in the earlier part of the morning. It is unknown why Ta Keo was never completed.

Ta Som is another favorite Angkor Wat temple of mine because of the massive strangler fig tree rising from the temple ruins.

In the center of Western Baray sits West Mebon, which once held a massive bronze statue of Vishnu that has since been moved to the Phnom Penh National Museum. You will need to take a boat from the shore of the baray to reach West Mebon.

Banteay Srei is usually a favorite among most visitors who go out to explore the outer Angkor temples because of its pink sandstone and impressive and intricate carvings. Known as the ‘citadel of the woman’ because it was believed to be carved by a woman as the carvings are too delicate and intricate to have been executed by a man.

Banteay Srei is included on the main Angkor ticket and is best visited in the late afternoon when the sun reflects the gorgeous pinks in the sandstone.

By and far my favorite temple of all of Angkor. Much of Beng Mealea is left in beautiful ruin as nature literally reclaims the ruin right in front of you.

Built under Saryavarman between 1112 and 1152 Beng Mealea is known as the lotus temple and has been left largely unrestored. Beng Mealea is off the beaten path for Angkor Wat, and as such, I found very few foreign tourists there when I visited.

You will need to buy a separate ticket when you arrive to visit Beng Mealea.

If you’re headed to Beng Mealea it’s with continuing on to combine it with a visit to Koh Ker. Koh Ker is a temple complex that was once the Angkorian capital from 928 to 944. Koh Ker still remains off the beaten path as it is one of the most remote temple complexes. You will need to purchase a separate entrance ticket when you arrive.

The temples of Roluos predate most of the Angkor Wat temples, built between 877 and 998 under Indravarman I. Roluos served as Indravarman I’s capital under the name Hariharalaya and is home to early Khmer classical art. Roluos consists of Preah Ko, Bakong, and Lolei temples, all of which are included under the main Angkor Archeological entrance ticket.

Although you’ll see plenty of tourists not adhering to the rules of respectful dress here, it is important to remember that these are still active holy sites. Knees and shoulders should be covered at very least, even though temperatures can be hellaciously hot. Loose-fitting and breathable fabrics are key. I’d recommend if you want to wear a tank top to bring a scarf to cover up shoulders with.

A sun hat and sunglasses are advisable to keep the sun out of your face, and don’t forget the sunscreen!

Where To Stay In Siem Reap

In Siem Reap there are accommodation options to fit every budget. Here are different places I recommend for each budget:

There are plenty of vendors and even a few restaurants to eat at while visiting the temples inside the park, so if you don't pack a meal for your temple-exploring days you won't go hungry. You can expect to pay $2-4 for a meal inside the park. Back in Siem Reap there are tons of food options from local to international cuisine. You'll find most restaurants gathered around Pub Street.

Have Any Questions About Visiting Angkor Wat? 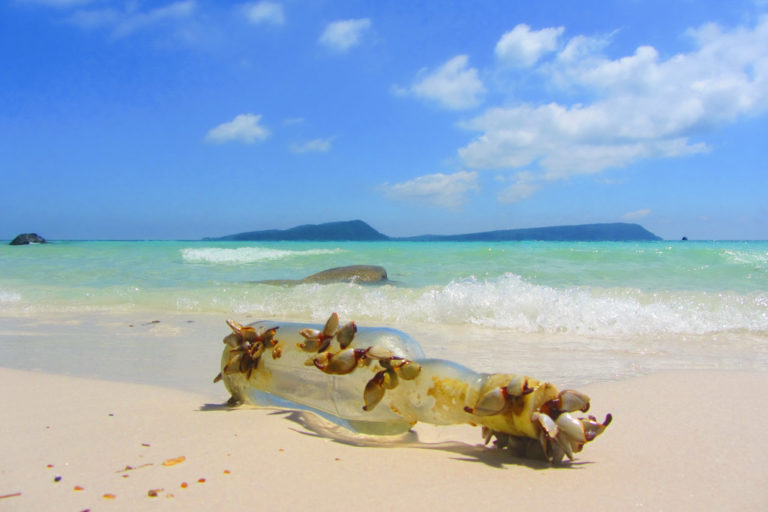 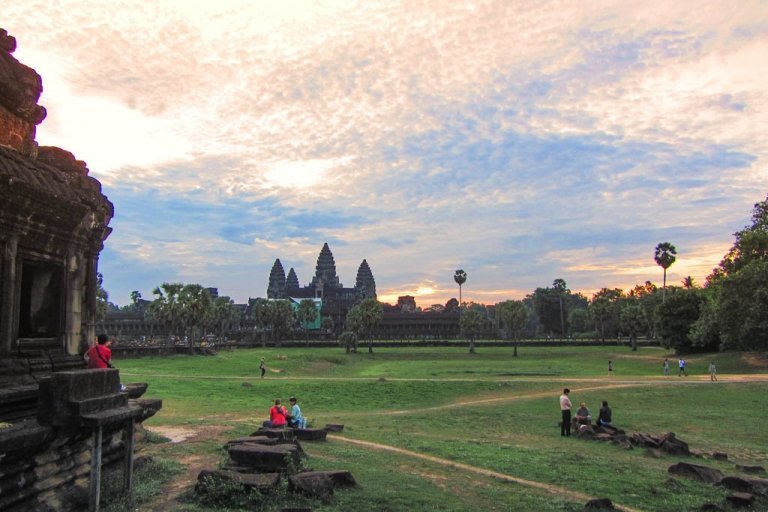 4 thoughts on “Plan The Perfect Visit To Angkor Wat”