I arrived in Sydney on a hot January day a few years back, and after a few days exploring the city, a couple of friends and I set off on a road trip to Jervis Bay along the Grand Pacific Drive.

Since we decided to continue a bit further south on our Grand Pacific Drive road trip, I am also including Gerringong, Seven Mile Beach, Jervis Bay, and Belmore Falls to my version I’ll be sharing with you of the Grand Pacific Drive.

Distance: 131 kilometers to Kiama | 296 including Jervis Bay and Belmore Falls.

Where to rent a car: Compare Sydney rental car prices on Expedia, Rentalcars.com, or Skyscanner.

Get An Early (Or Late) Start From Sydney

If you’re visiting Sydney for the first time, know that rush hour can be hellacious. So I’d recommend trying to hit the road before 6 am if you’re looking to get an early start or wait until after 10 am when it’s dwindled.

From Sydney, you’ll want to hit the A1 headed south out of the city. Your first stop will be to explore Royal National Park. Since we took on the Grand Pacific Drive road trip as a down and then back to Sydney excursion, we saved our visit to Royal National Park for last, so this is something to consider.

Royal National Park is the second oldest national park in the world, just after Yellowstone, in 1879. You could spend days in Royal National Park exploring the many destinations in the 151 square kilometer park, but if you have only a little time to spare it’s easy enough to visit quickly en route to Jervis Bay.

We opted for a visit to the Figure 8 Pool via Burning Palms Beach, which we were stoked to see. Just know if you plan to visit Figure 8 Pool that you will need to plan it with the tides as people have been swept out to sea here.

For those on a tight schedule, you can view the park as you drive through it heading between Sydney and the Austinmer Beach area.

Continuing south from Royal National Park toward Austinmer Beach, you’re going to take a bend toward the coast, where I recommend making the stop at Bald Hill Lookout for views southward over the rugged coast and beaches you’ll be passing on the Grand Pacific Drive road trip.

Shortly after your quick break at Bald Hill, you’ll continue along the coast to cross over the Sea Cliff Bridge.

Sea Cliff Bridge was constructed in 2005 to replace the old coastal road here that was frequently closed due to rock falls. There is a walkway you can access from a car park near the bridge and walk along to take in the views from this scenic bridge.

Austinmer Beach is the most popular beach in the Wollongong area, but there are several beaches you could opt to stop along between Sea Cliff Bridge and Austinmer so if you have the time on your Grand Pacific Drive road trip I’d recommend it.

Wollongong is Australia’s 10th largest city, located about 70 kilometers south of Sydney. It’s a coastal town that offers plenty to do in and around it including several beaches (including Austinmer Beach), Lake Illawarra, Nan Tien temple, Flagstaff Lighthouse, and if you happen to be visiting on a Thursday evening, be sure to pop into the Eat Streets Market in the CBD area of Wollongong.

South out of Wollongong will next bring you to Shellharbour via the Windang Bridge. If you’re getting hungry and didn’t stop for food in Wollongong, Shellharbour is known for its fish and chips.

From Shellharbour, you can take a detour into Killalea State Park and Bass Point for scenic views over the Pacific Ocean from the rugged coast.

As you near Kiama, make pitstops in to visit Minnamura Beach, Bombo Beach, and then of course once to Kiama you’ll want to pay a visit to the Kiama Blowhole.

Alternatively, you can take an inland detour from Kiama to go explore the Minnamura Rainforest.

Just beyond Kiama, you’ll reach the city of Gerringong, for those of you that plan to continue southward toward Jervis Bay.

Werri Beach is the long strip of sand that connects Gerringong to the sea, worth a visit to stretch your legs. If you have time to spare you could take on all or some of the 20 kilometer scenic Gerringong to Kiama Coastal Walk.

If you’re looking for a spot to grab breakfast or lunch, I recommend heading over to the Blue Goose Cafe in Gerringong, which is near to the Gerringong Cemetery, from where you’ll have great views down onto Werri Beach.

Know that it’s common for Seven Mile Beach to be quite windy, so be prepped to get sand everywhere. It’s wise to bring a dry bag to help protect your electronics from the sand.

Said to be home to the whitest sand in the world, Jervis Bay is worthy as an add on to your Grand Pacific Drive road trip. Jervis Bay can be divided up into three sections, Upper Jervis Bay (Curarong to Callala Bay), Central Jervis Bay (Huskisson to Hyams Beach), and Lower Jervis Bay (Murrays Beach and Booderee National Park).

You could spend days in the Jervis Bay area, there’s just that much to see! If you’re planning to camp, we stayed in the Honeymoon Bay Campground in Upper Jervis Bay and recommend it (call +61 2 4448 3411 to reserve a campsite). Do know that Jervis Bay campgrounds do book up well in advance, so reserve your spot ahead of time.

Keep your eyes peeled on the drive in and out of here as we saw a kangaroo and an echidna in the road near the track for Belmore Falls.

Where To Stay Along The Grand Pacific Drive

Honestly, that could be an entire blog post of its own! We beelined for Jervis Bay from Sydney and camped at Honeymoon Bay for three nights, giving us time to explore Jervis Bay and its surroundings before we did the Grand Pacific Drive in reverse back to Sydney in one day.

I recommend shopping for accommodations on booking.com in various towns along the Grand Pacific Drive route if you want to stay in hotels and make this a multi-day journey. If you will be camping as we did, I recommend checking out the NSW website to see what campgrounds there are in the area, some of which can be booked online, while others can be booked over the phone.

Have Any Questions About The Grand Pacific Drive Road Trip? 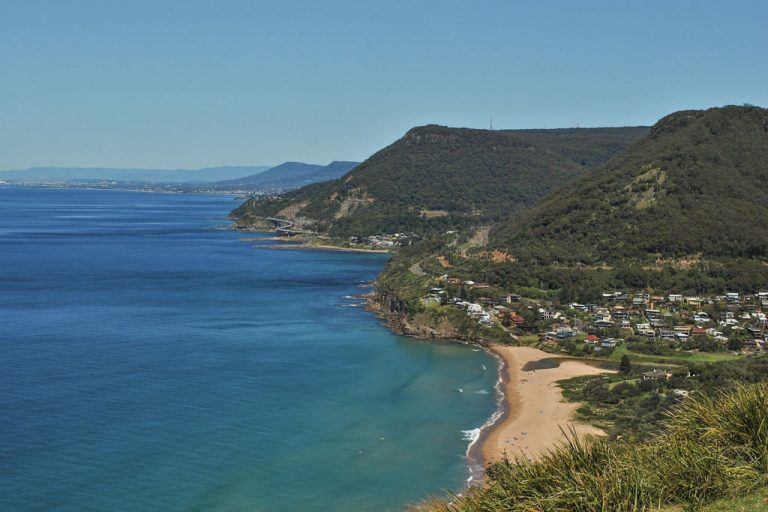 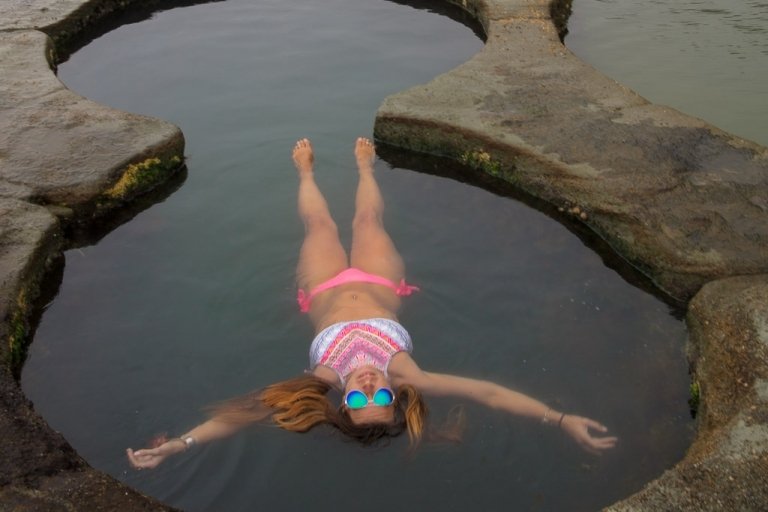 How To Get To The Figure 8 Pools Near Sydney, Australia