Updated November 2022, Socotra in Photos was originally written in October 2018

Rightly nicknamed ‘The Most Alien-Looking Place On Earth”, Yemen’s Socotra Island has bewildered and beguiled travelers and traders for over two millennia. Continue on to see Socotra in photos.

Start here: The Socotra travel guide
Grab a copy of Bradt’s first ever Socotra guidebook to help you plan!

This is Abdullah ‘The Caveman’ Aliyu. He spends his days split between a cave that has long been tied to his family, overlooking the Detwah Lagoon that he spends much of his time fishing in. Abdullah is proud of his Socotri roots and loves to show off his beautiful lagoon with anyone that happens to be visiting the part of Socotra he calls home.

I got to spend an entire day with Abdullah, catching different fish and sea creatures by hand and by hand-woven fishing nets.

The Socotra Archipelago broke away during the Miocene Epoch from the two nearest landmasses– The horn of Africa and the Arabian Peninsula, leaving itself to flourish in isolation for millions of years. Isolation can do interesting things to a place over the years, such as blessing it with odd flora and fauna like the Dracaena Cinnabari– better known as the rare Dragon Blood Tree.

Socotra is bisected from east to west by the jagged Haggier Mountain Range. The most recognizable peak in the range of course is the razor-sharp Skånd Peak.

It’s no surprise that seafood is a huge part of the Socotri diet with as much coastline as the island has.

Given the climate of Socotra it is difficult to grow many crops, so what few vegetables you find in the bazaar in Hadiboh are usually shipped over. Fresh seafood, goat, chicken, rice, flatbreads, honey, a homemade dairy drink similar to kefir, beans, cucumbers, onions, and tomatoes are common foods appearing in the local cuisine. However, no meal in Socotra is complete without a warm glass of sweetened shai (tea).

Socotra is home to monster sand dunes. Pictured above is the massive Arher Sand Dunes.

From the top, you have stunning views of the beaches and coast below, as well as a closer look at some of the larger than life cave openings in the face of the cliff that sits behind these dunes. Prior to the breakout of full-scale war in mainland Yemen, this was a popular spot for families from the big cities in Yemen to come camp tent-free under the stars when they came for rest and relaxation in Socotra.

This is a young Adenium Obesum subspecies Socotranum, or better known as the Bottle Tree. It’s not too often that you find many of the endemic trees to Socotra as young plants. Non-native goats that were brought to the island eons ago wreak havoc on the seedlings trying to survive in the harsh climate of Socotra.

Many of Socotra’s men spend their nights fishing offshore and return in the morning to sell their catch at a thatched-roof-stone-walled fish market on the outskirts of Hadiboh. This young man was proud to show me the dhow boats– one of which his father fished on each night, parked outside. Socotris are very proud of their island home and of their unique history.

In fact, the people of Socotra are quite unique themselves. Women of Socotra carry a DNA haplogroup found among no other population on Earth.

Want to read about my first visit? 10 days on Socotra Island

A natural pool with a view, the depression near the edge of the cliffside in Socotra’s Homhil Protected Area is filled with crystal clear water with views over the Arabian Sea below. Facing the other direction from the pool is a large and wide valley filled with endemic Boswellia Socotrana (Frankincense trees), Dragon Blood Trees, Cucumber Trees, and Bottle Trees.

Sunset over all the unusual flora that calls this swath of Socotra in the Homhil Protected Area home. In Homhil you can easily find endemic Socotra Frankincense Trees, Dragon Blood Trees, Cucumber Trees, Bottle Trees, and even Acacia Trees. The branches of Acacia trees are snapped off and collected by the Socotri people who then fray either end of the human-finger-in-diameter branches and use them as toothbrushes.

In the heat of the day, Abdullah Aliyu tosses out a handmade fishnet. He fishes the waters of the Detwah Lagoon during the day and even takes the odd tourist that turns up in the area to join him. In the evenings he returns to the nearby village of Qalansiya with his fresh catch to feed his wife and 6 children.

Wadi Derher splits the land from the edge of the Dixam Plateau like an open gash. The Wadi is nicknamed the ‘Grand Canyon of Socotra’ due to its impressive size.

Check out the wild and bizarre Firhmin Forest

A Dragon Blood Tree that was toppled over in a recent storm in the Homhil Protected Area in January 2014. By the fall of 2015, two back-to-back cyclones by the names of Chapala and Megh ravaged the island of Socotra and destroyed homes, flooded villages, and wreaked havoc on the endemic plant species.

While obviously cute, and a food source for the local Socotri people, goats are a non-native species to the island with an appetite for destruction. Goats have been longtime residents in Socotra, brought many moons ago by sailors who made a stop here as they crossed the seas in the name of trade.

Endemic plants are now often grown in nurseries protected from goats’ need to nibble hither thither so that they can have a chance to flourish as many Socotri plants are considered vulnerable.

Two Socotri young men I met while strolling along the Detwah Lagoon as the sun set over the Arabian Sea. One common trait I noticed among many of the Socotri boys and men that I met was that they would often approach me and ask me to take their photos and then excitedly wait to see the back of my camera when the photo processed and appeared.

Getting inside Socotra at Dagub Cave. Socotra is home to countless caves, many of which have not been fully explored. Dagub is not Socotra’s largest cave, and yet the opening is so large you can drive a Landcruiser into the mouth of it (which you can see from the photo above).

The plant that has rendered Yemen chewed dry– Qat. Qat is a leafy green that after chewed over a period of a few hours yields a mild euphoria that many describe as an amphetamine-like high. Qat chewing sessions typically start in the mid-afternoon and continue on throughout the evening in Yemen as well as Socotra, and popularly in Somalia, Ethiopia, Djibouti, and Kenya as well.

More prevalent among men, but still partook in by women, it’s not unusual to see bulging cheek stuffed to the brim with Qat leaf. In a sense, Qat had dried Yemen up over the last few decades with much of the country’s water supply has gone to keeping the Qat farms fertile, and even taking over crops that in the past once yielded vegetables and coffee.

The younger generation is beginning to recognize the problems Qat is wreaking on the country, but for the elder generations, it’s just a part of daily life in the south of the Arabian Peninsula.

Down in the bottom of Wadi Derher, there are oasis-like pools filled with perfectly clear turquoise waters of a stream that runs through the Wadi. Many Socotris will not venture into the wadi beyond dark as it is widely believed that the wadi is haunted.

The stunning Shua’ab Beach with impossibly white sands and water that fades from aquamarine to emerald to sapphire is reachable by dhow boat from the village of Qalansiya. Spinner dolphins can sometimes be found jumping from the waters as you make your way along the rocky coastline from Qalansiya to Shua’ab.

Start plotting out your trip: How to get to Socotra

The branches and blooms of the Adenium Socotranum, but more often called the Bottle Tree. Often described as being shaped like a deformed elephant leg you’ll find these bizarre trees growing from seemingly impossible places like out of mountainsides and from rocks.

High on the Dixam Plateau sits an impressive forest of these endemic Dragon Blood Trees. These unusual trees have adopted their strange shape in order to survive the harsh, arid climate of Socotra Island. The umbrella-like top actually helps to shade its roots and base, where the tree needs to conserve all the rain possible in the ground around it until the next rainstorm arrives.

The Dragon Blood Trees earned their nickname from the red sap that bleeds from the tree after the bark has been slashed.

My guide, Sami taking the leap over the nearly endless sea of sand dunes in Zahek along the southern coast of Socotra Island.

Socotra has been almost impossible to reach the last few years… almost. After countless hours of planning and arranging, I’m excited to invite you to join our upcoming expeditions to Socotra Island in 2022. Click here to find out more about the trips and to sign up. 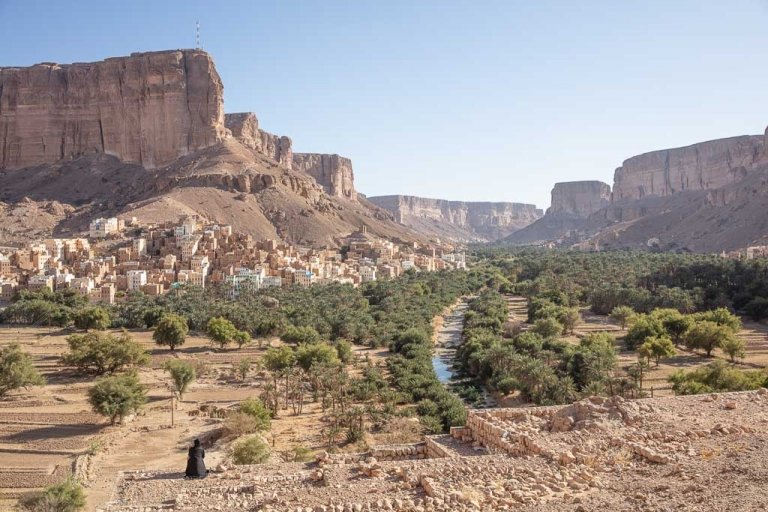 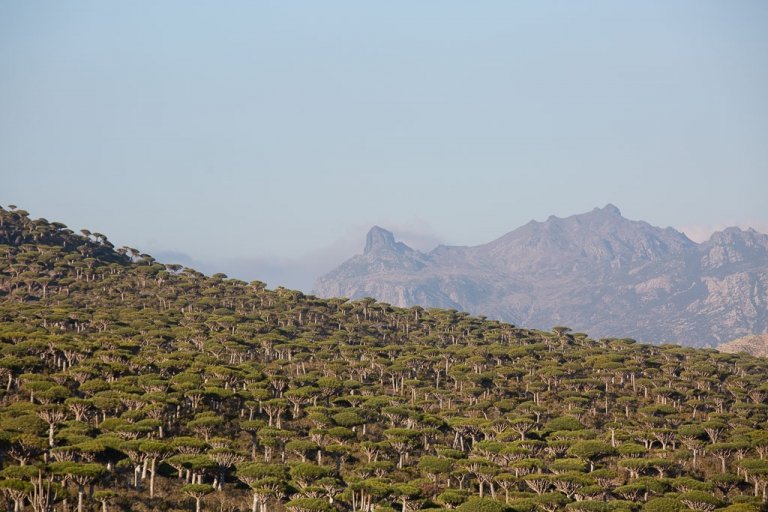 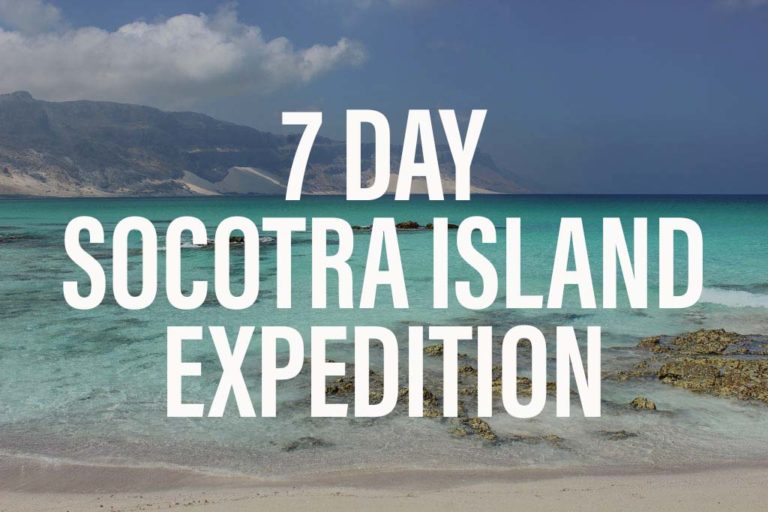 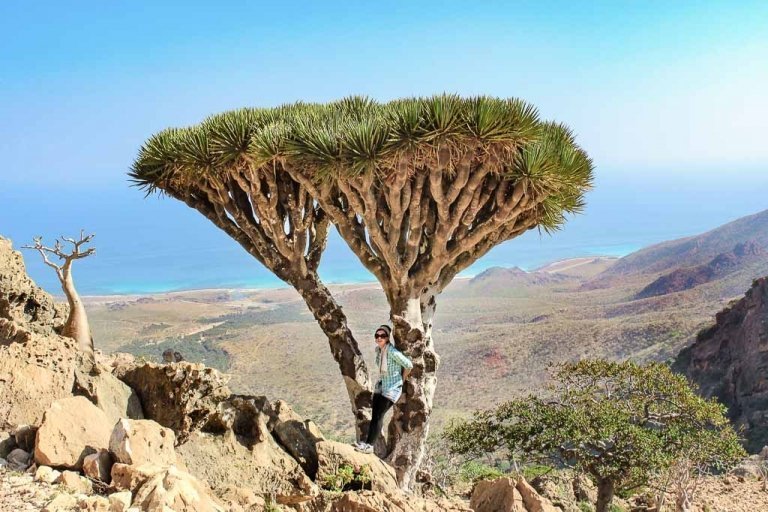 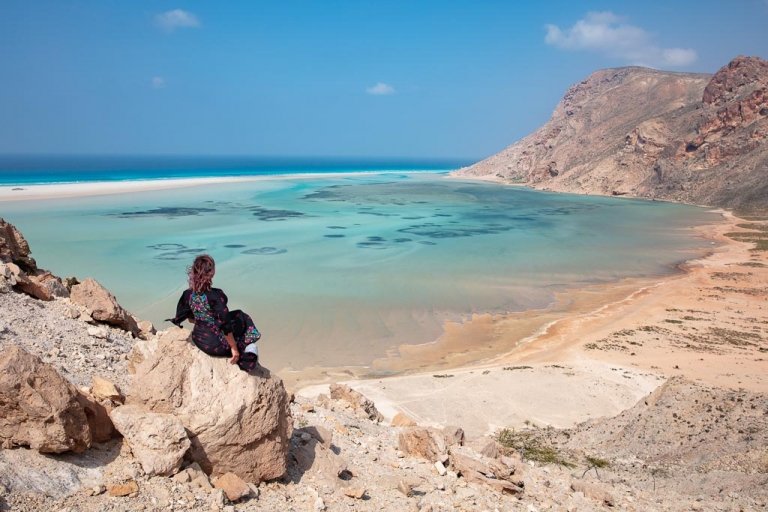 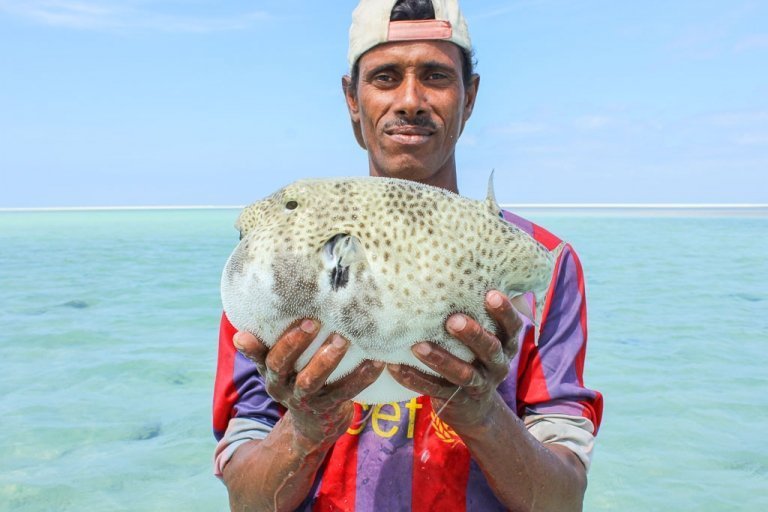 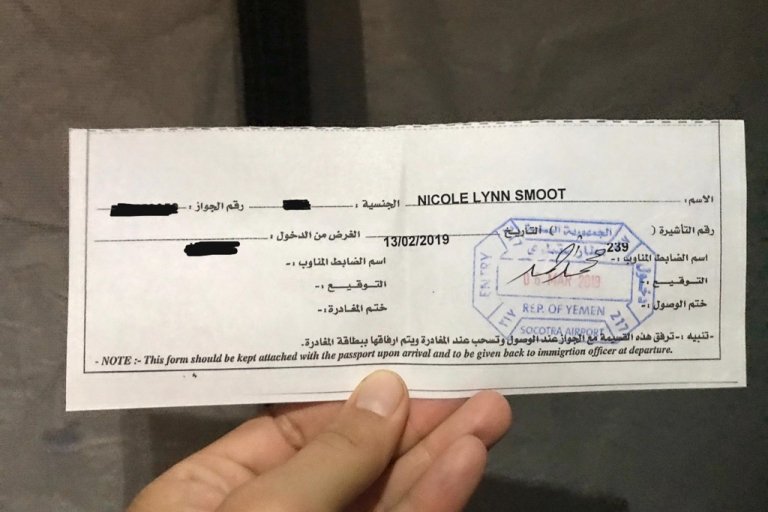 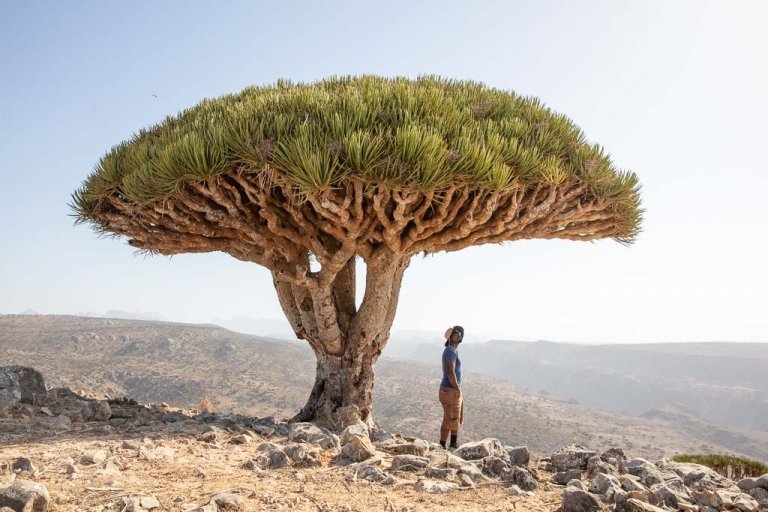 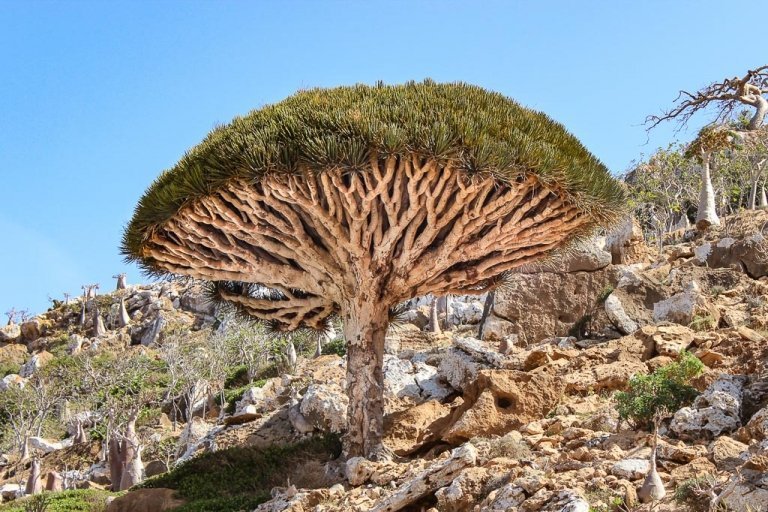 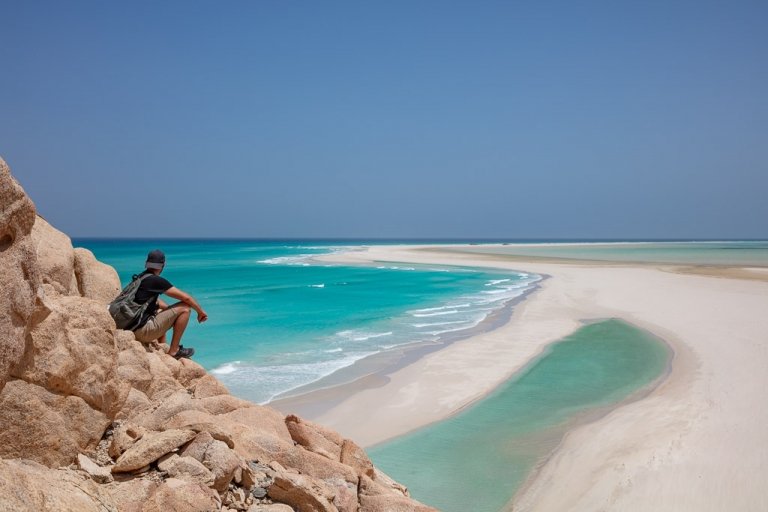 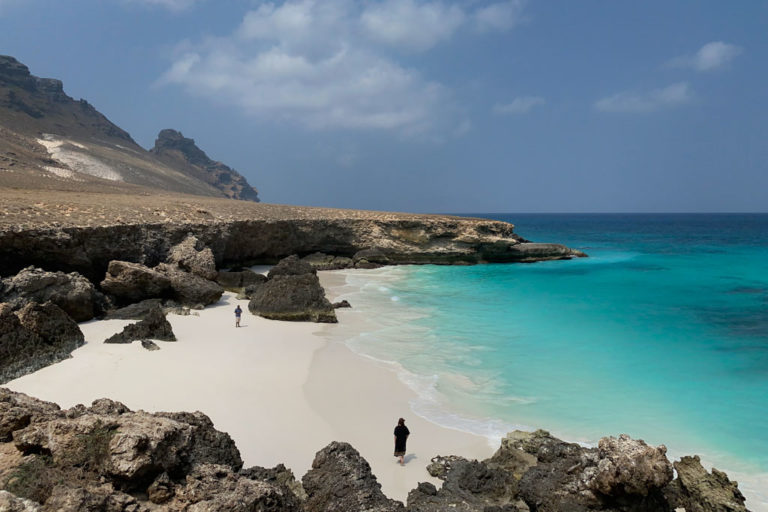 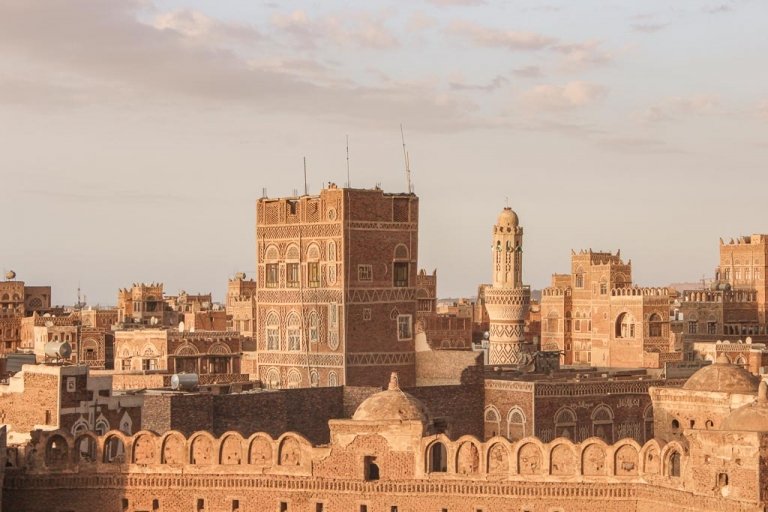 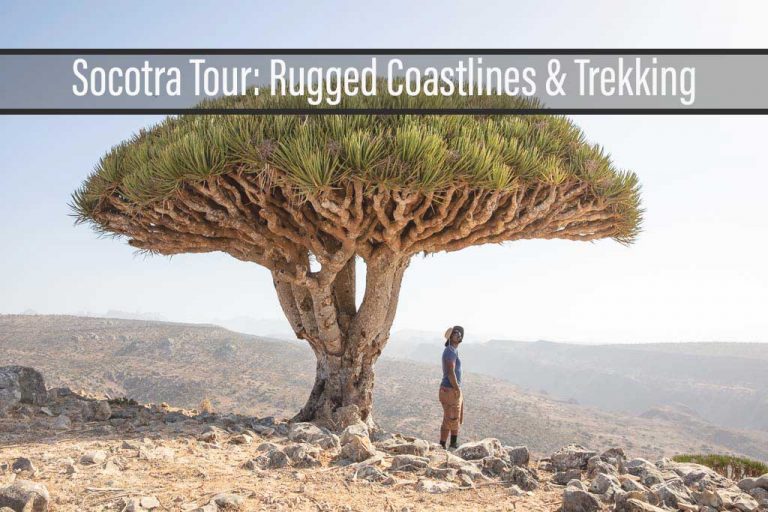 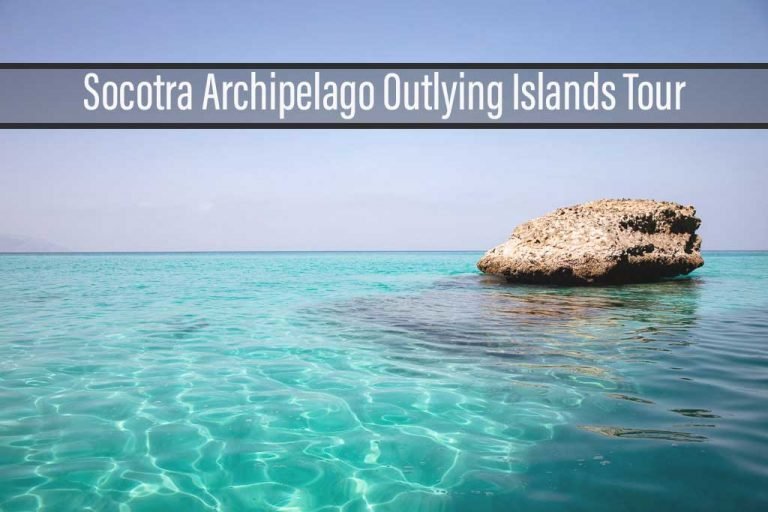