Looking like an out-of-this-world moonscape, Uplistsikhe is an abandoned cave town whose name translates out to the Lord’s Fortress.

Uplistsikhe is Georgia’s oldest cave towns among many, located in the Shida Kartli region very near to the city of Gori. In this guide, you’ll learn how to visit Uplistsikhe independently from Gori and Tbilisi as well as see organized day trip options from Tbilisi that include visits to Mtskheta and Gori’s Stalin Museum and its fortress.

Founded around 1000 BC during the Bronze Age, Uplistsikhe became an important religious center between the 6th-11th centuries was continuously inhabited until the 13th century.

Several paganistic pre-Christian artifacts have been unearthed at Uplistsikhe. Eventually, Christianity arrived in the region, but both the old religions and Christianity coexisted here for hundreds of years. After the arrival of Christianity to Uplistsikhe, the town began to decline as people began to move to other Christian-centric religious centers in Georgia.

Following the Arab conquests that sacked Tbilisi, Uplistsikhe had a renaissance with many moving back as a result of the Christian Kings of Kartli selecting it as the royal residence. The cave town would become an important stop along the Silk Road caravan route.

Finally, the Mongols arrived in the 13th century, decimating Uplistsikhe and seeing the full abandonment of the city for good.

Starting in the capital? Read the Tbilisi Travel Guide to start planning the perfect stay
Grab a copy of Bradt’s Georgia Guidebook to help you plan

How to Get to Uplistsikhe

At only 15 km away, it’s easiest to visit Uplistsikhe from Gori. From the Gori Bus Station, you can get on a minibus to the entrance of Uplistsikhe for 2 GEL per seat. Upon return, you can hail the minibus from the main road to get back to Gori.

Alternatively, you can grab a taxi from Gori for about 35 GEL to reach Uplistsikhe. This is roundtrip Gori-Uplistsikhe-Gori, including wait time (roughly 90 minutes to 2 hours).

Grab a marshrutka from the Tbilisi Bus Station outside of Didube Metro Station bound for Gori. They depart every 20-30 minutes or so when full starting at about 7 am and costs 4 GEL for a seat for the 90-minute ride.

Once at the Gori Bus Station, follow the instructions from getting to Uplistsikhe from Gori in the section above.

You can also opt to take the train from Tbilisi to Gori.

Entrance to the Uplistsikhe Cave Town is 15 GEL for foreigners. There is an additional 15 GEL charge for those that opt for the optional audio guide. Opening hours differ from season to season and are as follows:

Other Tips for Visiting Uplistsikhe

What to See at Uplistsikhe

Queen Tamar is one of Georgia’s most important historical figures, having run the kingdom in the 12th and 13th centuries. But Queen Tamar never lived in Uplistsikhe! So why is the hall named after her in the first place?

Thanks to the resemblance of this hall at Uplistsikhe to her former room at the Vardzia Cave City is the most likely reason why this hall got its misleading name.

Queen Tamar’s Hall is the most intricately decorated and the largest cave of Uplistsikhe. It’s widely believed that the hall was a pagan worship temple.

Uplistsikhe was also a center of wine production and a winemaking pit can be found right outside Queen Tamar’s Hall. Another feature not to miss is the Apothecary here, where medicinal herbs would have been stored for use.

The Single Pillar Hall consists of two rock pillars that reinforce the ceiling and is one of the most important structures of Uplistsikhe.

Church of the Prince

Also known as the Long Temple, the Church of the Prince sticks out like a sore thumb, not matching its surroundings whatsoever. Being a newer construction, the church dates back to the 10th century and is the only structure that survived the 13th century Mongol Invasion.

A Christian Basilica is carved right into the rock just below the Church of the Prince, believed to be a former temple that was dedicated to a sun goddess. The Three Nave or Three-Sided Basilica would have been constructed in the 6th century.

The Temple Makvliani is thought to have been Uplistsikhe’s main pagan worship center, consisting of numerous chambers and rooms carved right into the stone. It’s believed that the Temple of Makvliani was a place of worship of a sun goddess.

Fun fact: Makvliani means blackberry in Georgian, a vine you will inevitably see dangling from the cave roof.

Despite being nicknamed the Theatre it’s more likely that this structure was a temple. No one is quite sure what the temple would have been used for but it’s thought to date back to the 1st century AD. With a triangular roof facade and columns that have been rebuilt from concrete, it’s easy to recognize.

The Caisson Hall was easily one of my favorites at Uplistsikhe and is impossible to miss with its geometrically patterned carved arched ceiling. This forms the central section of the Theatre.

Priests and other religious figures would have taken up residence in the large rock that many of Uplistsikhe’s temples are carved into, but the general population of the ancient cave city would have lived downhill in the distance.

While the abandoned main town isn’t open to visitors, you can get glimpses of it from atop Uplistsikhe.

Head over to Get Your Guide and check out this highly-rated day trip to Uplistsikhe, Mtskheta, Jvari, and Gori from Tbilisi.

Have Any Questions About Visiting Uplistsikhe? 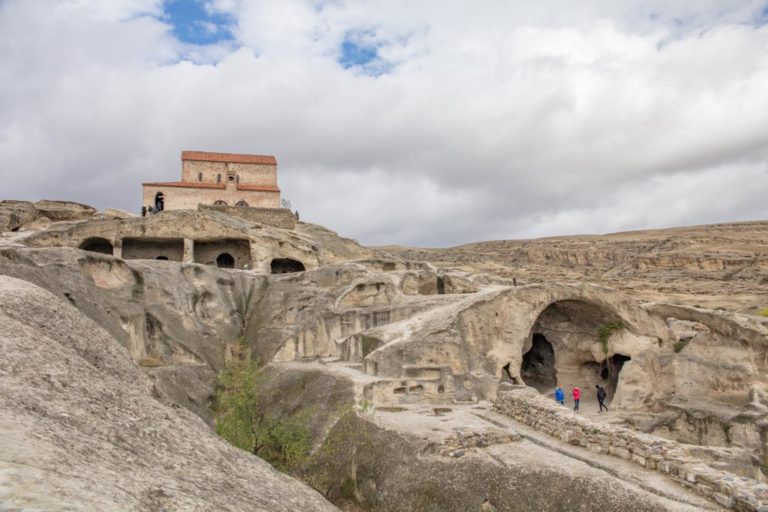 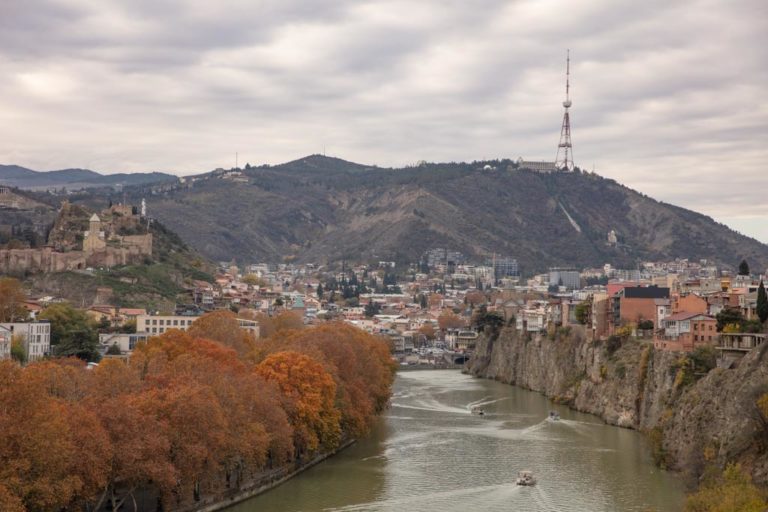 24 Things to do in Tbilisi, Georgia + Tbilisi Travel Guide 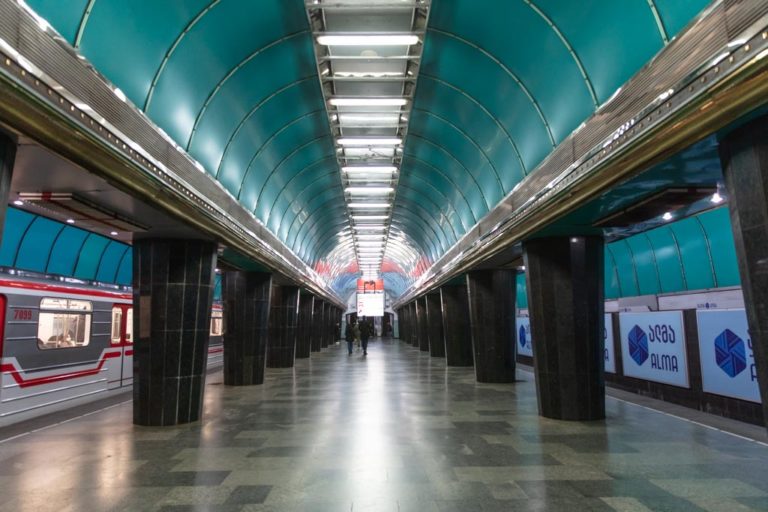 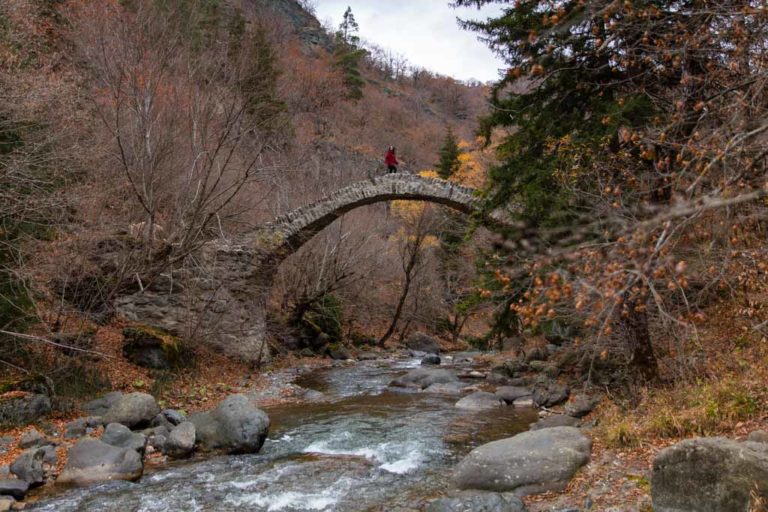