This publication is made possible by the support of the American People through the United States Agency for International Development (USAID) Competitiveness, Trade, and Jobs Activity in Central Asia. The contents of this publication are the sole responsibility of Nicole from The Adventures of Nicole and do not necessarily reflect the views of USAID or the United States Government.

The 14 Best Things to do in Almaty + Almaty Day Trips

Updated in October 2022, The Best Things To Do In Almaty was originally written in August 2019

Almaty, aka: the city of apples is the largest city in Kazakhstan and a must-see on any Kazakhstan itinerary. Once the capital (that torch was handed off to Astana, recently renamed Nur Sultan), Almaty is full of rich history.

With an Eastern European city feel, while still encompassing traits making it uniquely Kazakh, Almaty can be a great place to stop off on your Central Asia adventures for creature comforts, and can also make a great base for those wanting to satellite out to explore. Read on to discover some of the best things to do in Almaty.

Check out this one day Almaty city tour on Viator

Things to do in Almaty Table Of Contents

The Best Things to do in Almaty

You’ve probably seen photos of colorful Zenkov Cathedral in the heart of Almaty’s Panfilov Park perusing google for information on the city.

Also referred to as Ascension Cathedral, this Russian Orthodox Church built in 1907 (undergoing restoration in 2018) is the second talked wooden structure in the world.

If you’re looking for things to do in Almaty, many of them are centered around Panfilov Park. This is the place to hang out in Almaty with plenty of places to stroll and home to Zenkov Cathedral and a War Memorial to an Almaty infantry unit. Panfilov is named after the 28 soldiers who died fighting off Nazis just outside Moscow in 1941.

This is where to head to get a taste of daily life and get a feel for the real bustle of Almaty. You can purchase literally anything imaginable here from Kumis (fermented horse milk), fresh produce, clothing, household supplies, and everything between.

Due to its crowded nature pickpocketing does happen here, so have a close eye on valuables at all times.

Almaty has a few museums to pop into, especially if you’re trying to escape the summertime heat midday.

Dedicated to first Kazakh Soviet politician Dinmukhamed Kunaev and located in his once home.

Located in Panfilov Park, this museum is home to many instruments you’ve likely never seen or heard before. There is a small hall inside that holds concerts.

For the best views over Almaty grab a cable car up to Almaty’s hilltop carnival Kok Tobe. Many days there are special performances held here.

With the Soviets came their bath and spa culture. Arasan Baths are the best place in Almaty to experience this. Head inside and kick back in various pools of different temperatures.

Note that most visit the pools in the nude and pools are gender-segregated.

Being the dominant religion of the region there is a massive mosque in the middle of Almaty. Foreigners are free to enter so long as dressed appropriately. There should be headscarves and coverings available to rent at the door if you aren’t.

8. Visit The Academy Of Sciences

The Academy of Sciences was an attraction in Almaty that I’d not heard of before and knew nothing of until I took a Walking Almaty Tour that focused on the Golden Corner of Almaty, a more off the main tourist trail twist on the city. The building now houses 5 small museums that include Kazakh Natural History, Rare Books, the Satpaev Museum, Archeology, and the Museum of the Science of the History of Kazakhstan.

Stroll down this street to watch street performers and snack your way along the path.

This recreational park smack in the middle of Almaty likely has something to keep everyone in your group entertained with a carnival, cinema, aqua park, and cafes.

A square with plenty of monuments and views to the presidential palace and Maslikat Building.

In most parts of the world taking the metro isn’t a special experience, but in the post-Soviet Central Asian republics of Kazakhstan and Uzbekistan, they’re ornate works of art, two of the most notable being Baikonur, Jibek Joli, and Auezov Theatre Stations.

Wanna See For Yourself? Check Out My Post: A Tour Through The Almaty Metro

Another great day trip from Almaty is to Big Almaty Lake (BAO) located about 1 hour from the city center. Weekdays in the morning are best to avoid crowds.

To get here grab a taxi from Almaty. It should cost you about 7,000 KZT return including a couple of hours of wait time. City bus #8 will take you to the park entrance, but you’ll need to walk or hitch another 11 kilometers to the lake.

Hike Or Iceskate At Medeu

Head to Medeu for the epic views of the area surrounding Almaty. If you visit in the winter don’t miss out on ice skating at the outdoor rink.

Take bus #12 from the city center to go directly to the rink in Medau. Buses leave on a 30 min schedule.

Ski Or Hike The Slopes At Chimbulak

Chimbulak is a great day trip from Almaty year-round. In summer you can actually trek between Chimbulak and Medau and in winter ski the slopes.

Take bus #12 to Medau from the city center and then take the cable car (2,500 KZT return) or hike up to Chimbulak.

Located near to each other and easily reachable from the village of Saty outside of Almaty, Lake Kaindy and Kolsai Lakes will not disappoint. Kolsai Lakes is comprised of three glacial lakes that dot a beautiful evergreen landscape with waterfalls abound.

Lake Kaindy is home to the famous and unusual sunken forest. Kaindy and Kolsai can easily be visited on a combined trip in a couple of days.

Wanna See The Strange Sunken Forest Of Lake Kaindy & Trek To Kolsai Lakes?
Read: How To Get To Kaindy & Kolsai Lakes

Kazakhstan’s Grand Canyon with sweeping views over orangey-red rock formations in a desert landscape— a far cry from the other surrounding day trips from Almaty. There is great camping to be had out here at the canyon.

Don’t wanna go at it alone? Check out this one day Charyn Canyon tour on Viator

Home to the eerie whistling dunes, ancient burial mounds, Turanga trees, and the unusual rainbowy Aktau Mountains smack in the middle of a barren steppe. Located 260 kilometers north of Almaty a trip of multiple days to take in the best of the national park is recommended. Check out Megan Starr’s post on her visit to the Singing Dunes at Altyn Emel for info on how to visit.

Head to Tamgaly Gorge to view Buddhist rock petroglyphs. Combining it with nearby attractions can make for a great day trip from Almaty.

How To Get To Almaty

Thankfully Almaty is one of the easier cities to get to in Central Asia from Europe and the Middle East by flight. If you’re already traveling in Central Asia the closest city is Bishkek, Kyrgyzstan, just a 4 hour marshrutka ride away.

Getting Around In Almaty

Almaty is easy to get around with an extensive bus network and with its single line metro. Getting a taxi is not a problem, you can haggle with drivers you can flag down on the street or order a car on the Yandex.Taxi app.

Where To Stay In Almaty

Being a hub in Central Asia Almaty has accommodations to fit any budget and traveler type. From my own experience here are the accommodations I recommend.

What To Eat In Almaty

Tours Of Almaty & Beyond

Don’t wanna deal with the logistics of figuring out how to get around the city or some of the surround areas? Don’t sweat it, you’re not alone and you’re on vacation– so you don’t have to. I highly recommend Walking Almaty Tours. Click here to shop various tours on offer in and around Almaty.

Have Any Questions Or Sites You Recommend To Visit In Almaty? 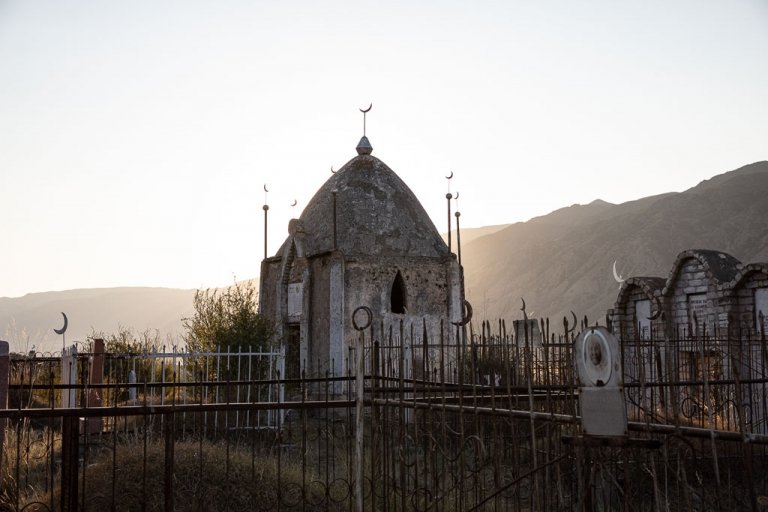 32 Photos That Will Put Kazakhstan On Your Bucketlist 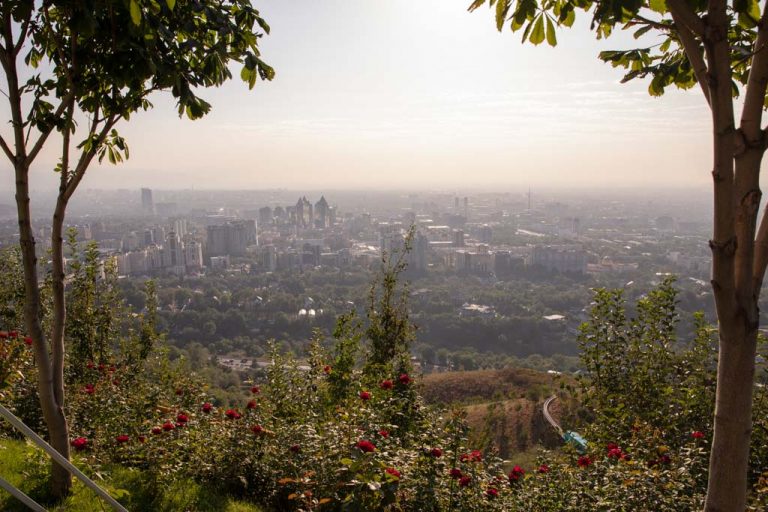 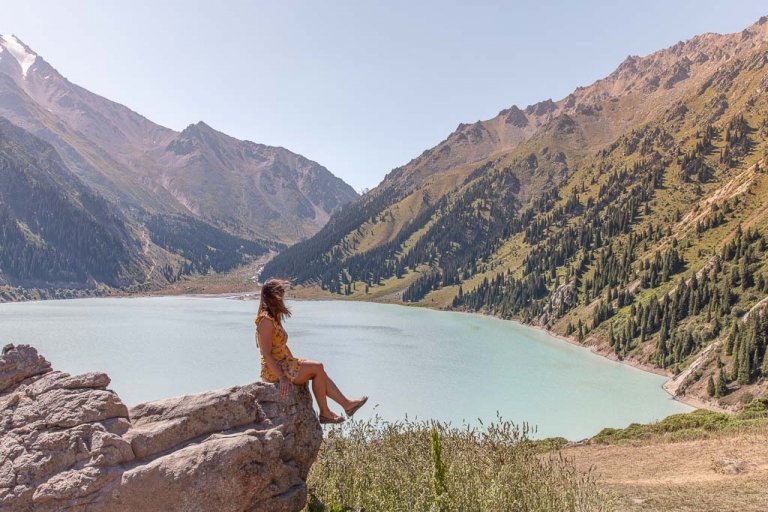 How To Get To Big Almaty Lake 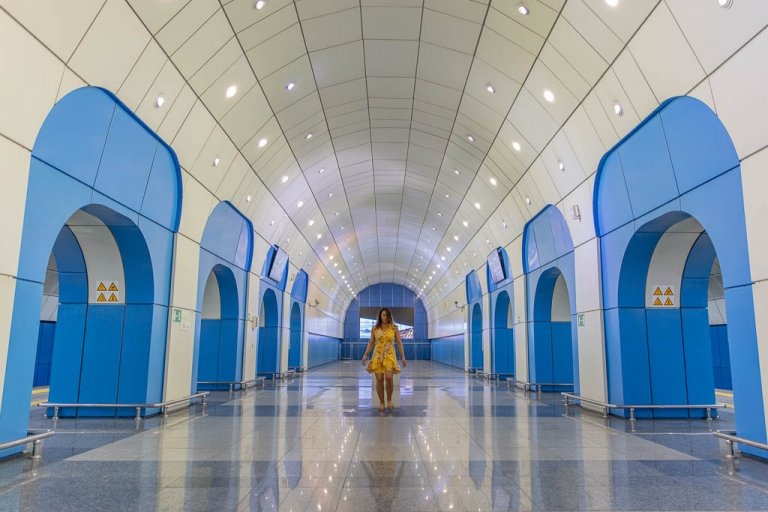 A Tour Though The Almaty Metro 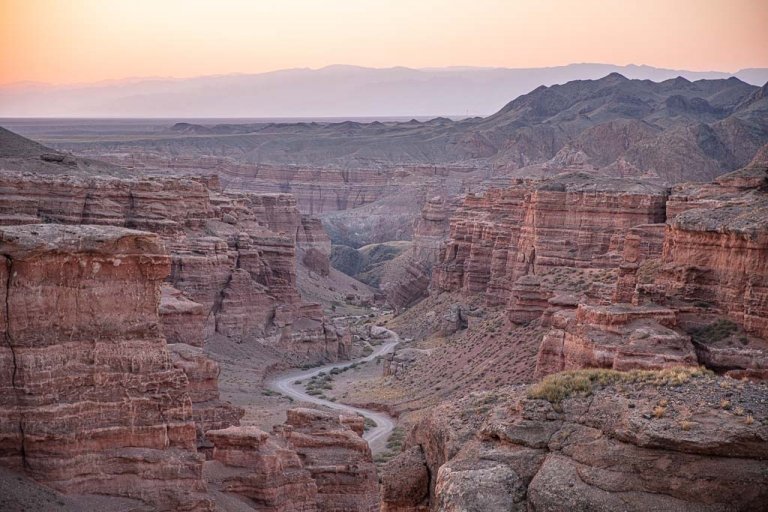 How To Get To Charyn Canyon, Kazakhstan 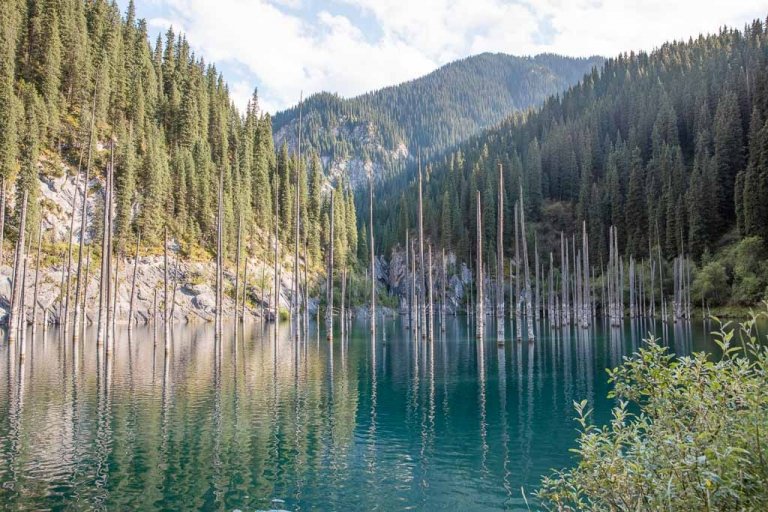 Lake Kaindy & Kolsai Lakes: Everything You Need To Know 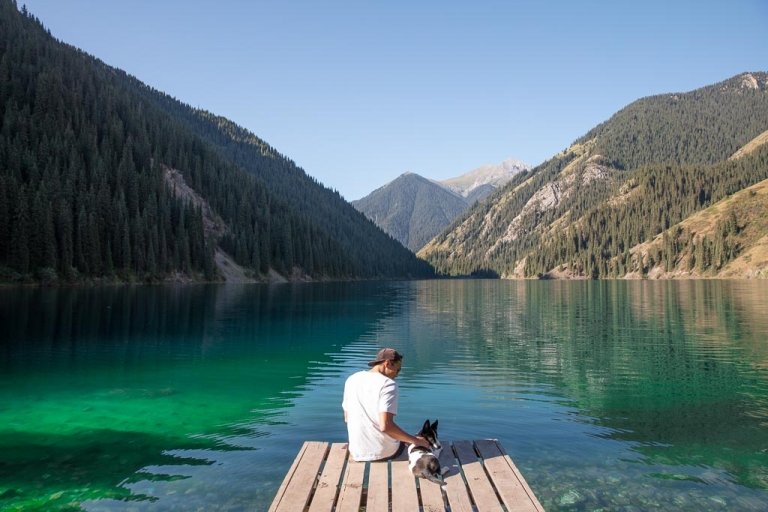 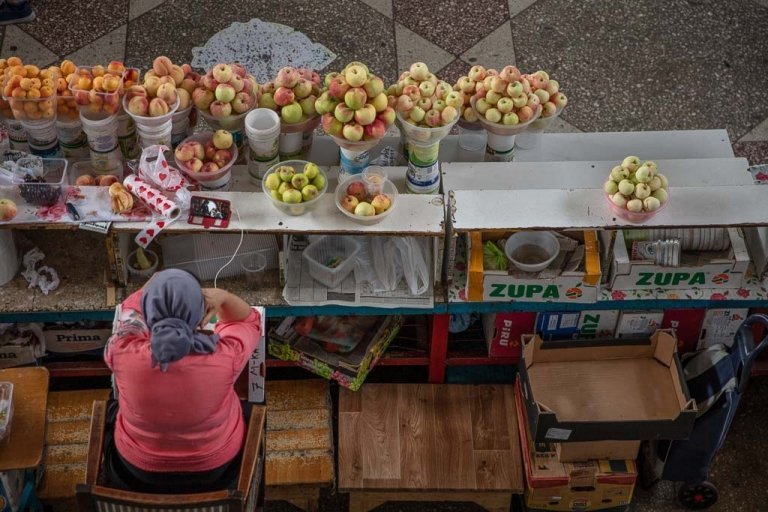 The 14 Best Things To Do In Almaty + Almaty Day Trips